In 2012, MEE implemented an 18-month, non-randomized pilot study to assess the feasibility and effectiveness of using Black beauty salons as settings for culturally sensitive health education about the impact of HPV and cervical cancer, along with HPV vaccination. The unbranded pilot project, designed with cancer prevention researchers at Thomas Jefferson University, took place in Philadelphia and was underwritten by Merck, Inc., makers of the Gardasil vaccine.

This research project represented a unique private sector/academic partnership that leveraged and built on the skills and expertise of MEE’s public health communications and social marketing expertise targeting underserved audiences. Our research partners included two nationally recognized thought leaders (Emory University’s Ralph DiClemente [LinkedIn], Ph.D. and Gina Wingood, Ph.D. [LinkedIn]) about how culture and environment impacts sexual health promotion, along with Amy Leader, Ph.D. [LinkedIn], a Philadelphia-based researcher who had developed and was implementing a community-based, multi-focused intervention to increase awareness and uptake of the HPV vaccine among young women in Philadelphia.

The team aimed to implement a highly tailored, culturally-relevant health education program for African-American women about cervical cancer prevention in neighborhood hair salons. The goals of the project were to help women make informed choices by increasing their knowledge and awareness about HPV, as well as to increase intentions to vaccinate among young women and their influencers /caregivers. MEE mobilized Black-owned hair salons because Black women in formative research focus groups we conducted said that they have trust in their stylist, which helped in introducing this sexual-health topic within the salon setting.

MEE recruited ten salons in North and West Philadelphia, educating stylists about HPV so that they could share information with their customers, and then offered in-depth education sessions with more than 200 women. We targeted African American salon customers, ages 18-26 who were able to make their own vaccination decisions and mothers or guardians (primary caregivers) of African American girls who were 9-17 years old.

Insights gained included those related to the most effective processes for delivering such a health intervention. We know now that the best way to use salons as a venue to reach their customers is to educate women while they are at the salon, rather than to recruit at salons and then educate them later as a two-step process. We know that women learned from the brief intervention, and continued the dialogue with their family and friends after our time with them had long ended. Knowledge and intentions to vaccinate against HPV significantly increased among study participants. More than two-thirds of the salon customers shared their provided HPV information book with a peer or family member after the session.

We know that knowledge and attitudes towards HPV vaccination were positively and significantly changed, and that in the future, lives may be saved because of it. Almost all young women ages 18-26 and 90% of mothers of girls eligible for the vaccines said they planned to talk to their doctor about HPV during their next visit.  Stylists responded favorably to being a part of the study and were eager to continue to provide health education for their customers, allowing another avenue for long-term community interventions to reduce health disparities. 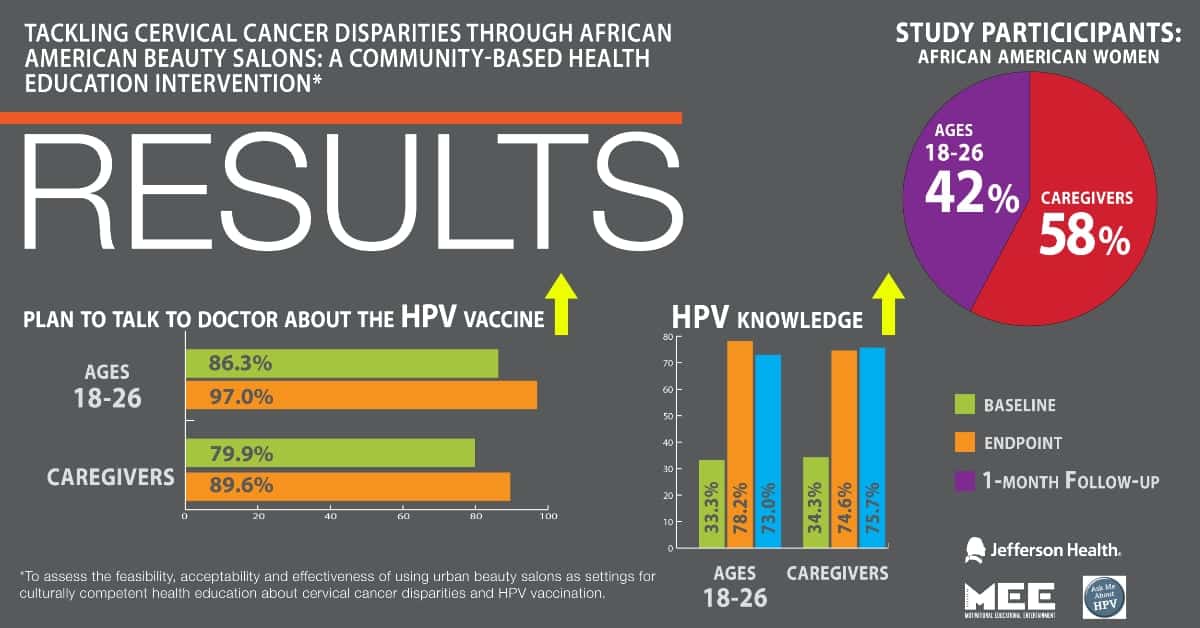 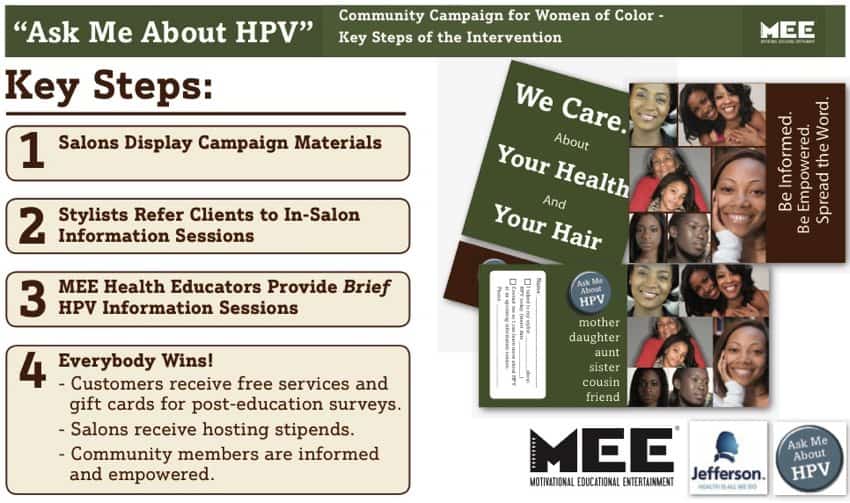