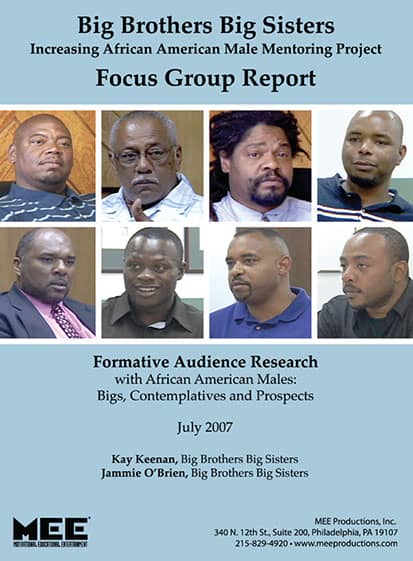 MEE conducted an audience research project for Big Brothers, Big Sisters (BBBS) in order to gather in-depth information that served as the foundation for an enhanced marketing campaign to increase the participation of African-American men as mentors. MEE conducted five focus groups in St. Louis, Baltimore and Philadelphia. They included current Big Brothers, men who had considered becoming a Big Brother and those who had not. The data collected from these African-American males helped BBBS understand various perspectives on being and becoming a mentor. MEE made recommendations to assist in designing messages, materials and an effective strategy to increase the participation of African-American men as Big Brothers.

As a follow-up to its research project, MEE developed Brothers: We Are The Village, a six-minute DVD that promoted mentoring to African American males and encouraged them to become a Big Brother. It also educated African-American male mentoring candidates about the benefits of formal mentoring and the positive impact it can have on both their lives and the life of a young person. The DVD was used as both a stand-alone promotional tool in its entirety and as part of a broader BBBS presentation to community groups, churches, fraternal organizations, etc.