Blueprint for a Safer Philadelphia 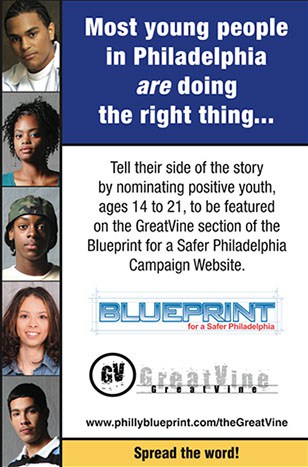 The Blueprint for a Safer Philadelphia violence prevention initiative, which ran for five years, in response to concerns about youth violence in Philadelphia was an extensively evaluated social marketing campaign. The two main objectives were to: develop and disseminate messages to change the community mindset, norms and values related to violence; and to put programs in place to support positive citywide change. MEE was commissioned soon after the launch of the initiative to develop and implement the social marketing campaign that served as a strong foundation for community-level change.

As a result of MEE’s social marketing campaign, Blueprint messages effectively penetrated and mobilized the Philadelphia community to prevent violence. MEE was extremely effective in raising awareness of youth violence among residents in the hardest-hit communities and began a dialogue to generate potential solutions. For the multi-year Blueprint campaign, MEE produced bi-monthly evaluation/tracking reports that presented the accomplishments and challenges of the social marketing campaign. Several of the evaluative measures are highlighted below.

In multiple years, radio advertising was placed on culturally-specific stations in Philadelphia that allowed the campaign to effectively and efficiently reach its primary targets. The use of radio also included talk radio outlets and community promotions organized in conjunction with local radio stations. Working with our media partners, we tracked the reach and frequency of all ads, along with the number of sponsored promotional events. SEPTA transit ads ran on carefully selected bus, subway and El train routes during the campaign. Viewer impressions of these ads were also tracked.

For the campaign hotline, we reported not only the total number of calls received each month (through a subcontractor, CHOICE), but also how many and where referrals were made to local agencies and organizations funded or supported by the Blueprint initiative. Community Action Teams (CATs) or Street Teams “pitched” the Blueprint’s message in a variety of public settings, including hair and nail salons, barber shops, public housing, music and video stores and other high-traffic retail outlets. We tracked the number of outreach sites and sessions, along with the number of brochures, flyers, posters, and other campaign giveaways that teams shared with local residents.