Reducing Tobacco Use by African-American Men in Louisiana 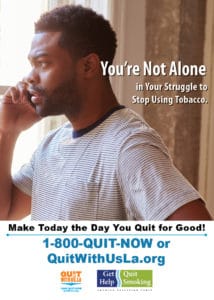 After implementing the campaign in Shreveport and Baton Rouge, MEE was again hired by the Louisiana Public Health Institute (LPHI) to roll-out their African-American Male Tobacco Cessation campaign in New Orleans in 1Q of 2018. The campaign targeted African-American males, ages 35 – 59, who knew why they shouldn’t smoke or who wanted to quit and lets them know that they had support available to them by highlighting the state’s resources that could help them be successful.

MEE’s campaign promoted and raised awareness of the Louisiana Tobacco Quitline (1-800-QUIT-NOW) and the QuitWithUsLa.org website where users could receive Tobacco Cessation Trust services, such as: consultation with a tobacco cessation specialist; free self-help guides, tools and support materials; referrals to face-to-face programs in their areas; and materials for smokeless tobacco users. The campaign also delivered the message that these and other resources are user-friendly, culturally specific and can be trusted.

As part of the campaign, MEE also helped LPHI and its local partners plan and implement, New Orleans Speaks: A Job Fair and Health Expo at SUNO. The community event took place at Southern University at New Orleans and featured presentations from community leaders, a representative from the mayor’s office and local businesses and organizations.

In 3Q 2018, LPHI hired MEE to roll out the campaign in six markets across the state: Alexandria, Monroe, Opelousas, Shreveport, Baton Rouge and New Orleans over the course of 10 months.