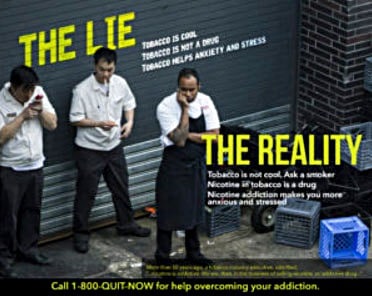 MEE was hired by the Philadelphia Department of Public Health to support its tobacco use prevention efforts. The work was part of Get Healthy Philly, a groundbreaking initiative to prevent obesity and smoking via policy, systems and environmental changes. The media campaign promoted quitting among Philadelphia smokers ages 30-50 within low-income populations. Of the ten largest U.S. cities, Philadelphia had the highest prevalence of adult smoking (25%), as well as high levels of youth smoking. Among the six largest U.S. cities, Philadelphia had the highest rate of death from lung cancer.