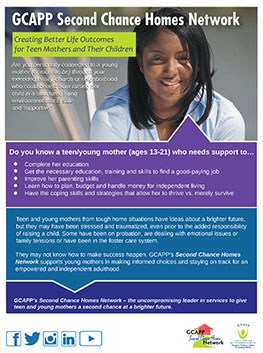 In a second major project with the Georgia Campaign for Adolescent Power and Potential (GCAPP), MEE was hired to help the organization promote its Second Chance Homes Network. These communal-living sites provide housing and a wide range of supports to pregnant and parenting young mothers (ages 14-20) who need a safe place to stay. MEE developed and implemented a digital-driven campaign targeting Georgia social services professionals who make placements of former foster youth and others living in at-risk environments. As a foundation, MEE made site visits to several of the homes, interviewed staff, conducted focus groups with social workers and talked to young women who benefited from the GCAPP Second Chance Homes experience.

For the campaign, MEE created campaign iconography (including a logo and slogan) and a call-to-action, several print materials, custom web landing pages, a series of virtual tour and interview videos, social media content and advertising, along with a series of HTML e-mails that social workers could share within their peer networks. The campaign goal was to build and expand a database of contacts within the social services community in Georgia by collecting relevant e-mail addresses and “likes” to the campaign Facebook page.